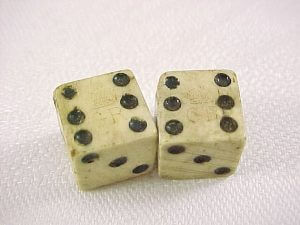 Hazard is a dice game that is played with two dice that originated in early Britain. It was a very popular game to play in the 17th and 18th centuries and is believed to be one of the games that the popular craps game was developed from as a simpler version to the complicated rules of Hazard.

A Basic History of Hazard

Even though Hazard was only most notably popular from the 17th century the game is documented from as far back as the 14th century where it is mentioned in Geoffrey Chaucer’s Canterbury Tales. It is in these tales that the phrase, at sixes and sevens, is believed to have derived from. Chaucer used the phrase as a description of betting ones whole fortune on one single throw of the dice but today the phrase is used to describe any circumstance involving disorder or confusion.

The word that the game is name after is an Old French word with unclear origins. It is believed that it may have been derived from the Spanish word ‘azar’ which means an unfortunate card or dice roll. Whatever the true origins of the word, the modern English use of Hazard is to now describe danger or risk.

The Rules to Playing Hazard

Hazard can be played with any number of players but only one player holds the dice at any one time. The dice holder is called the caster. The caster begins with selecting any number from five to nine, which is called the main, and throws the dice.

Betting in a Game of Hazard

In the Hazard game the caster places a bet with the bank, known as the setter. The setter may be the remaining players as a group. If a win occurs on the first throw then an equal amount to the bet is won. After the initial throw the caster will win the bet if a chance is thrown before the main.

When the first throw has taken place the caster and other players may place a side bet on whether the chance will be thrown before the main.