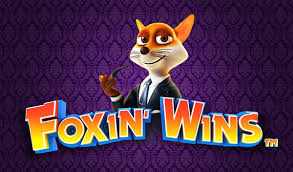 Unlike many animal slots titles, Foxin’ Wins from NextGen is not based on a popular tale. It’s set in the sumptuous drawing room of rich Mr Fox. We don’t know how Mr Fox made his money, but the pot of gold that is the Scatter symbol and the occasional mugging of a leprechaun in the bonus game suggest that he’s lucky.

Foxin’ Wins has charming and amusing graphics set against a richly decorated interior, with the reels and the Super Bet controller fashioned in wood and brass. Some of the game controls form part of the décor in the foreground; for example, a whisky glass is the Gamble button. The higher-value symbols are all cartoon icons relating to Mr Fox’s fabulous lifestyle, and jolly music accompanies play.

Foxin’ Wins has a simple layout of five reels with three windows each, offering 25 fixed paylines. Players can vary the bet per line from 0.01 to 2.00 in the relevant currency, for a maximum total bet of 50.00 per spin. 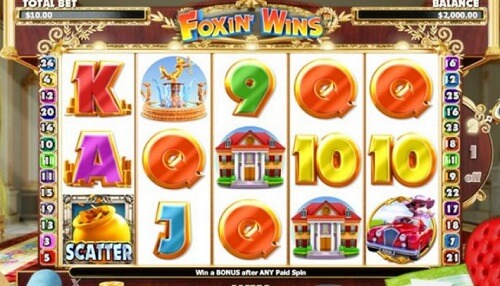 However, even in base play, there is a bonus surprise: a fox cub hiding in Reel 3, who can pop out at random and turn any symbol on the reel Wild. To the right of the reels is the lever controlling the Super Bet. For an additional 25 coins per spin, the player will get fox cubs, and potential extra Wilds, in Reels 2, 3 and 4, and if the player sets the Super Bet on 50 coins per spin, fox cubs and the Wilds they can trigger are available on all five reels.

Icons of the Good Life

As is the default in slots titles, Foxin’ Wins uses poker symbols for its low-value icons. There are four other theme-related icons that show off Mr Fox’s wealth. A thick roll of banknotes and an ornate fountain topped by a gold fox are the two lowest. Then comes a multi-storey mansion, worth up to 500 coins for five of a kind, and finally Mrs Fox in her fuchsia Rolls Royce. Both the mansion and the car start paying out at two of a kind, and the top prize, for five cars, is 1,000 coins.

A suave portrait of Mr Fox is the Foxin’ Wins Wild symbol, and it can crop up on any reel to substitute for any icon except the Scatter and create more wins. Depending on the Super Bet setting, fox cubs can trigger extra Wilds too. This helps increase the Wild wins as well; two, three, four or five Wilds in sequence on a payline win 10, 200, 500 or 2,000 coins, respectively.

The Scatter Bonus is a Pot of Gold, and two, three, four or five Scatters in any position win X1, X5, X15 or X100 the total bet for the spin. Three or more Scatters at the same time trigger a bonus game of 10 free spins with a X2 multiplier on all wins, which can be retriggered during bonus play. The fox cubs get more excited during bonus rounds, creating bigger Wild wins.

Foxin’ Wins also has a Fox Funds bonus feature, which appears at random and simply tops up the player’s balance. The Leprechaun Shake Down is also triggered at random; a leprechaun will appear, and Mr Fox shakes him by one leg as gold falls out his pockets.