The Clash of Queens slot game has been created by Genesis Software and is a graphically impressive online slot machine. It features a five reel, twenty five line play system, and is based around a professionally realised Alice in Wonderland theme. The bonus game is both impressive visually, and unique in its execution, and, combined with the excellent sound design worth seeing just for the sceptical. The game is available on mobile phone, tablet, home computer and laptop, but optimised specifically for play on a home computer.

How to Play in Detail

The Clash of Queens slot machine game uses the basic rules of casino slot machines, plus a few special features and added additions. In order to play, and potentially earn payouts and win cash, the player must first make an upfront bet and decide how many lines to bet upon. The Clash of Queens slot game is a five reel, twenty five line betting system, meaning that the player is able to bet on just one line, all twenty five lines, or any number in between.

The more lines bet on, the higher the chance of winning and payouts being achieved, but the larger the upfront bet required. To change the betting lines click the menu button found on the left, then increase or decrease the amount of lines via the plus and minus buttons. The bet amount may also be changed in this same menu.

Once the betting lines and bet amount are set, the reels may then be spun. Upon stopping matching sequences will automatically be made, from left to right, with the value of the symbols in the sequence dictating payout amounts. If any bonus symbols are landed in a sequence they will automatically be triggered. Once a round is finished and payouts have been made, the betting lines and bet may be changed, and the reels may again be spun. 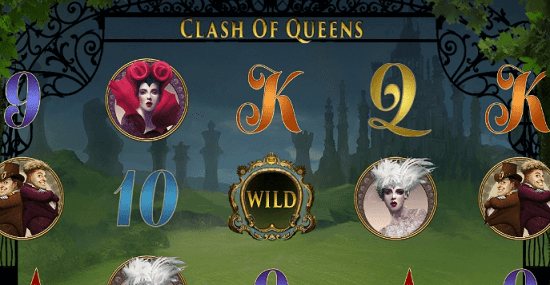 The core of the Clash of Queens slot machine game theme is war between the red and white queen, known by those who are familiar with the Alice in Wonderland story. The bonus system of the game, therefore, is a clash between these two beautiful but deadly queens. If the red queen or white queen land on reel one, and the other lands on reel five, the Clash of Queens feature is triggered.

The casino online player must select to bet on either queen, then watch the battle. Note that the battle cannot be swung either way by any input from the player. If the player bet on the red queen and she wins, eight free spins are awarded. If she loses, four free spins are awarded. If the player bet on the white queen and she wins, they will receive a multiplier of two for the white queen mini-game, which involves the player picking randomly from hidden symbols. The player may keep picking until they reveal the word collect, which will end the game. Another special feature of the game is the wild symbol, represented by the word wild. This symbol may match with any other symbol to create a winning sequence, except the scatter symbol, which is the highest value symbol and may match with itself even if not in sequence.