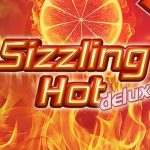 An updated version of a previous release by Novomatic, Sizzling Hot Deluxe can be described as a classic online slot. Those are games that take old-fashioned slot machines of the sort that might be found in land-based casinos and pubs.

As classic gameplay is the focus, the game has five reels, five fixed paylines, and mainly fruit symbols. A Scatter is included as a special symbol, and the game also has a gamble feature that can be used at discretion.

The game varies from its predecessor in that its functionality, and audio and visuals are better, and it has more adjustable settings.

The Sizzling Hot Deluxe gamble feature will only activate if the Gamble button is selected when a payout is won. The feature is optional, and must be activated by clicking the button.

A new screen opens when the button is clicked. Several playing cards are on the screen. One of those cards is face down.

The colour of the hole card must be guessed. The prize for a correct guess is the doubling of the total amount of coins won thus far. The feature can be played again.

If an incorrect guess was made, all winnings thus far are lost, and the base game resumes.

The Start button initiates the spinning of the reels. It must be selected whenever the reels are to be spun. The reels come to a stop automatically, one at a time.

The autoplay mode, in which the slot spins the reels automatically, must be activated using the Autoplay button.

All but two of the eight Sizzling Hot Deluxe online slot reel symbols are fruit. However, the remaining two are from the same slot machine tradition that first used fruit on the reels.

Included on the reels are a green and pink watermelon, a bunch of black grapes, a purple plum, an orange, a lemon, two cherries on stalks, a large red seven, and a five-pointed gold star.

The Sizzling Hot Deluxe fruit symbols that pay the highest are the watermelon and the grapes. Their payouts range between 400 and 4000 coins. They are followed by the plum, orange, lemon, and cherries, which pay out between 40 and 1600 coins.

The Scatter symbol in Sizzling Hot Deluxe is so named because it can pay out even when it is scattered on the reels, and not in consecutive order on one payline.