6 Million Dollar Man is an online slot titled inspired the classic television series. In the show, an astronaut named Steve Austin is involved in a horrible accident and a special government organisation reconstructs him using bionic parts. This series was very popular and made Lee Majors a star. Lee played the lead in the series.

This slot title was developed by Playtech and features their unique graphical style. The game also features great looking clips from the show. They play out whenever you hit certain bonus features. This really adds to the overall atmosphere of the game and will keep you spinning the reels. This title features 5 of those reels as well as 50 fixed pay lines to activate in game. This title features Wilds, Scatter Symbols as well as the unique Bionic Spin bonus feature.

During play, you will see a bionic spin lever in the bottom right of the reels. Once pulled, this lever will activate Bionic Mode. During bionic mode you will wager an additional 50% of your total bet. Bionic mode will randomly add up to five extra wild symbols on the reels for some big rewards. The Bionic Spin can only be activated during the standard game, not the free spins round.

The Standard symbols in the 6 Million Dollar Man online casinos Australia slot are represented by the Ten, Jack, Ace, Queen and King symbols. The Queen, Jack and Ten are worth a maximum pay out of 125 coins, while the Ace and King will be worth 150 coins. These symbols require at least three matching symbols on an active pay line to trigger a payout. 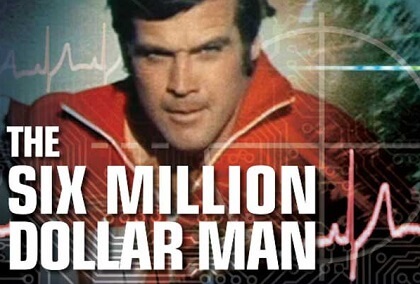 Steve Austin, the 6 Million Dollar Man himself functions as the game’s wild symbol. This symbol will change its value in order to complete any winning combination that it is part of. Two Steve Austin symbols will pay out 25 coins. Five however will result in the game’s biggest pay out, 4000 coins.

The 6 Million Dollar Man logos activate the Bionic Free Games. If you land three or more of the logos on screen, you will be awarded with 15 free spins. During the free spins, landing the bionic body parts on the reels will fill a special bar on the side of the screen. Once the bar has been filled you will receive two free spins and a free wild that appears on screen. This wild will now become part of the stacked wild feature.